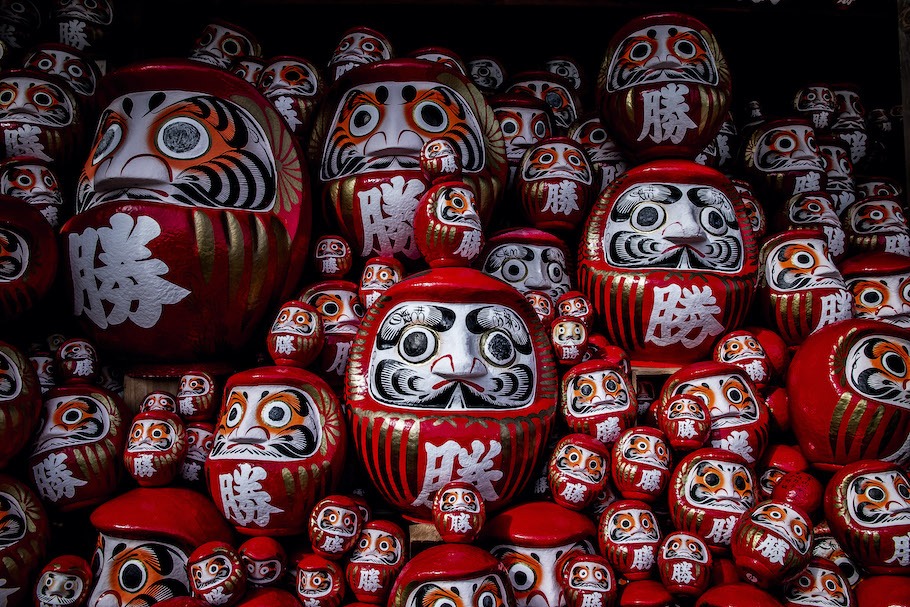 The gift of the Daruma (達磨) in Japan:

The Daruma depicts a monk, a symbol of perseverance, to whom you can make a wish.

The tradition of the Daruma ...

The Daruma is the Japanese statuette of a bearded and mustache monk, which depicts Bodhidharma, the founder and first patriarch of the Zen tradition in Buddhism.

The Japanese believe that Daruma will fulfill an important wish of its owner.

Daruma is a symbol of perseverance and good luck, so a great encouraging gift.

Daruma is commonly used in Buddhism as an aid in achieving a personal goal.

* take the Daruma with both hands and make your wish

* after making the wish to Daruma, paint his left eye

* places the Daruma in an elevated position in the house

* when the wish comes true, paint the second eye of the Daruma

* once the wish has been granted, the Daruma is burned at the end of the year, in a purification ritual.

The Shorinzan Daruma-ji Temple (少林 山 達磨 寺) is located in Takasaki: it was built in 1697 and dedicated to Daruma. On January 6th and 7th every year, the Shorinzan Nanakusa Taisai Daruma Market Festival is held here, a great opportunity to buy your Daruma. Here people traditionally buy their Daruma for the new year.

Due to the arson of the Daruma temple and its valuable archive, the exact information remains a mystery, but it is said that there was a monk named Shinetsu, who began distributing Daruma-shaped omamori talismans here as early as 1667 .

It is also said that, in 1800, during a famine, the faithful made rudimentary Daruma dolls, using papier-mâché on a wooden core. From that moment the knowledge and cult of Daruma dolls spread throughout Japan.

Daruma is usually red, which in Japan means "protection against evil".

The Daruma doll is oval, with no arms, legs or eyes.

The Daruma is made of papier-mâché or wood, so that it can be burned, according to tradition, at the end of the year.

No account? Create one here
Product added to wishlist
Product added to compare.
All orders placed between May 16th and June 2nd will be processed starting from 3th of June due to participation at Nippon Connection Fair event.